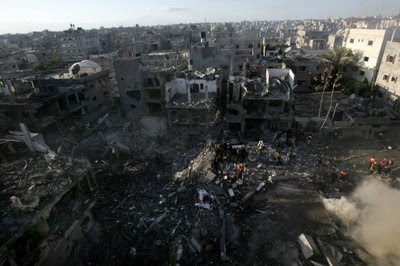 The IDF has been dropping leaflets in Gaza urging that civilians flee from their homes. Some people who flee their homes for other districts of Gaza find that the same warnings have been dropped in the areas where they have sought refuge. In the Lebanon war of 2006 the IDF used its warnings as a rationale for killing zones where anyone moving was considered to be an enemy.

It has frequently been noted that the people of Gaza are trapped. They have nowhere to run, but I suspect that many have no idea how densely populated Gaza really is and how difficult it is for many people to find safe shelter. Thanks to one of my bright graduate students at Boston University, I offer the following data:

Now imagine conducting a military campaign with field artillery, tank guns and thousands of bombs in Tokyo, Birmingham or Los Angeles. Add the fact that the people living in those cities cannot flee, but are stuck there.